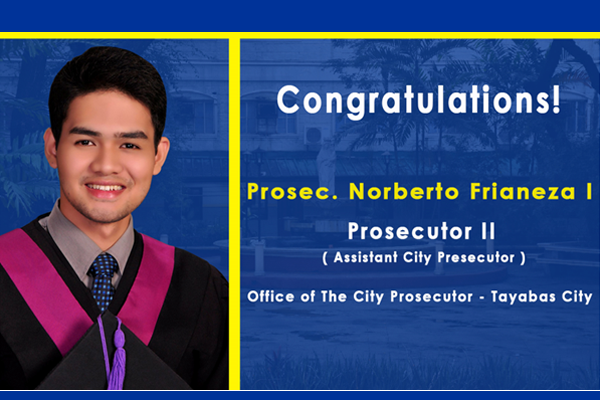 President Duterte has appointed 35 prosecutors for the various offices of the National Prosecution Service (NPS) of the Department of Justice (DOJ). Justice Secretary Menardo Guevarra announced last January 06, 2022 the appointments and among those newly appointed is a Perpetualite Lawyer Prosec. Norberto De Jesus Frianeza I as Prosecutor II of the Office of the City Prosecutor of Tayabas City, Quezon Province.

The Perpetualite community extends its wholehearted congratulations to Prosec. Norberto De Jesus Frianeza I, a graduate of UPHSL College of Law class of 2011 on his appointment. Prosec. Frianeza also obtained his Bachelor of Science in Commerce major in Business Management (Class of 2007) in this university. Prior to his appointment, Prosec. Frianeza worked as lawyer in the Public Attorney's Office of the Department of Justice. The appointment of Prosec. Frianeza is a clear testament of his hard work, sacrifice and dedication to his noble profession. Also, the elevation of his career is a clear attestation of the goal of the UPHSL College of Law to produce graduates who are armed with the necessary legal knowledge and competence and for them to become instrumental members of the legal profession.

The Perpetualite Community is proud of you!